High school student Ito (KOMAI Ren) lives in rural Aomori prefecture in northern Japan. Teased at school for her thick Tsugaru accent, she has become introverted and afraid to speak. Her only creative outlet is the shamisen, which she learned to play in the style of her mother and grandmother. When Ito sees a job advertisement for a “maid cafe” in Aomori City, she sees this as an opportunity to break free of her shyness. Aomori’s only “maid cafe” is a bit different from the ones in Tokyo, and desperate for a new waitress, Ito gets hired on the spot.

Slowly but surely Ito begins to emerge from her shell. But when disaster strikes on the job, it may be the shamisen that rescues her, and the cafe, after all. “Grand Prize Winner” at the Osaka Asian Film Festival 2021, this sophomore film from director YOKOHAMA Satoko is charming and heartfelt. Director YOKOHAMA, an Aomori native herself, captures a sense of authenticity in the film, solidified by the breakout performance of the young KOMAI Ren as Ito. 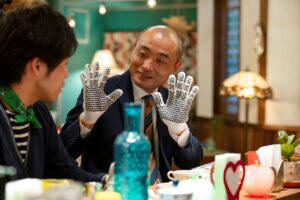